About the Ishizuchi Mountain Range

The Ishizuchi Mountain Range stretches about 50 km east-west along the border between Shikoku’s Ehime and Kōchi Prefectures. At its center is Mount Ishizuchi, western Japan’s highest peak at 1,982m and one of the 100 Famous Japanese Mountains.
A succession of over twenty peaks with elevations above 1,500m form the range. Its peaks exhibit a distinct vertical distribution of zones, from temperate to subarctic, and it contains a treasure trove of flora and fauna as well, including rare endemic species.
Two major clear-flowing waterways, the Niyodo-gawa and Yoshino-gawa Rivers, as well as the Kamo-gawa River and the “uchinuki no mizu” springs, have their sources located within the Ishizuchi Mountain Range. The rich abundance of water here has formed gorges and waterfalls throughout the mountains where it flows.
From the splendor of the Omogo-kei Gorge, Shikoku’s largest ravine, to the falls of Hodonono-taki, the landscape of the Ishizuchi Mountain Range offers unique opportunities for enjoyment.

Experience the Splendor of Nature
The Ishizuchi Mountain Range, Overflowing with Charm

Trails pass through the range’s precipitous mountain contours, along gently sloping mountain ridges and into virgin forests of deep green. Blessed with an abundance of natural beauty, the Ishizuchi Mountain Range offers stunning scenery.
August temperatures atop Mount Ishizuchi average 18.7°C, 10°C cooler than the flatlands below. While located in temperate Shikoku, subarctic vegetation is found near the peak, which snow covers in the winter. Still, from springtime through summer, rare alpine plants come into bloom one after another, and in autumn Japanese beech and maple trees turn to brilliant shades, offering a beautiful display of fall foliage for visitors’ enjoyment.
With the many activities it offers, from mountaineering and trekking to trail-running, cycling, rafting, canoeing and more, the region attracts a large number of visitors year-round. 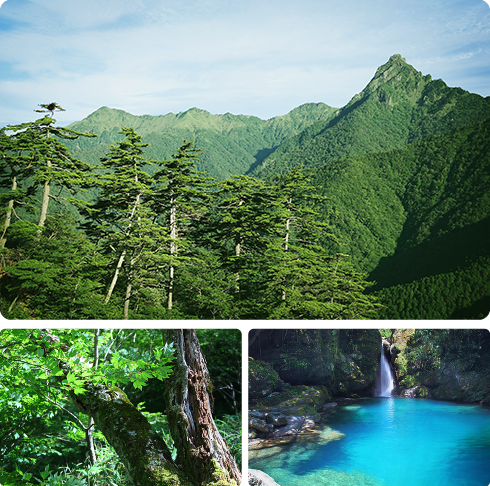 Located on the border between the towns of Saijō-shi and Kumakōgen-chō, Mount Ishizuchi is western Japan’s highest peak at an elevation of 1,982m. The central mountain of the Ishizuchi Mountain Range, it has been designated as part of the Ishizuchi Quasi-National Park. One of the main climbing routes from the Saijō-shi side ascends from Jōju-sha Shrine with the use of a ropeway. Another route, the Tsuchigoya route, starts at the Tsuchigoya terminal and heads up along the Ishizuchi Skyline or Mount Kamegamori Forest Road. 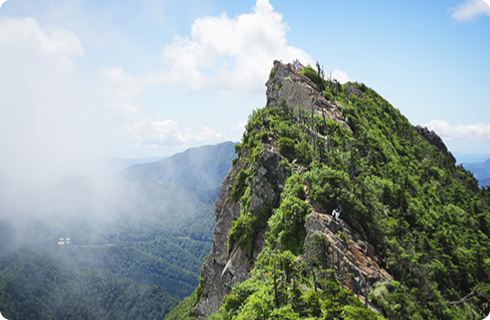 Counted among the 200 Famous Japanese Mountains as well as the 100 Famous Shikoku Mountains, the peak takes its name from the broad-leaf bamboo (the ibuki-zasa species here, Sasa tsuboiana) that covers its gently sloping summit (as Sasagamine translates to “Broad-Leaf Bamboo Peak”). Views from the top offer sights of Mount Ishizuchi to the west, the Seto Inland Sea to the north, and Tosa Bay to the south beyond a succession of mountain ranges. The mountain is considered one of the “Three Peaks of Iyo.” 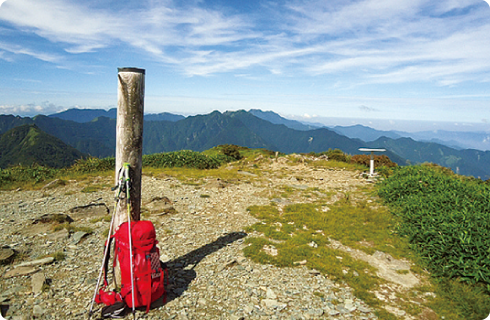 Near the summit of Mount Kamegamori are level meadows covered to a striking degree with sasa, broad-leaf bamboo. There are stands of Japanese momi fir (Abies firma) and southern Japanese hemlock (Tsuga sieboldii) as well, and its scenery is remarkably beautiful with views of snag forests with bleached white trunks. The natural beauty offered here makes it fit to be called the “Panorama Dai” or viewing platform of Shikoku. 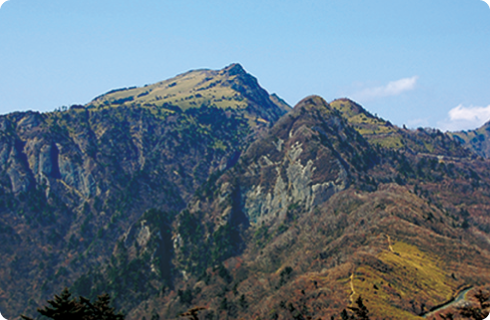 1,756m high, this is one of the 300 Famous Japanese Mountains. As its name “Fuji” suggests, the mountain has a grandiose air, and though the area at the summit is limited in size, it offers the enjoyment of 360° panoramic views of Mount Ishizuchi and the Seto Inland Sea, extending clear to the Akaishi Mountain Range as well. 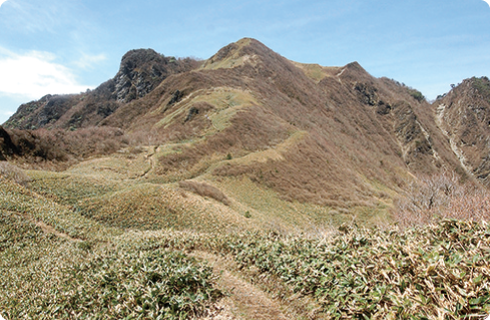 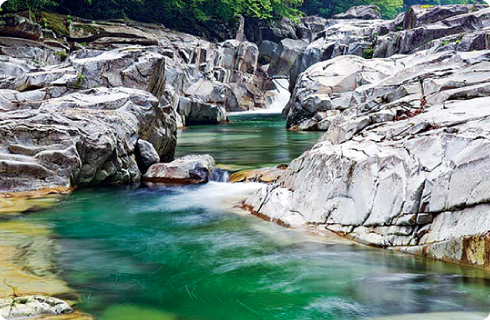 With the Ishizuchi Mountain Range’s acute differences in elevation, the vegetation can vary depending on the elevation level due to the vertical distribution these mountains exhibit. There is about a 1,300m difference in elevation between the Omogo-kei Gorge (lowest in the range at 700m) and the summit of Mount Tengu-dake (1,982m), so the main vegetation zones found in Japan can be seen here. Japanese oak (Stercus stenophylla) and the common camellia (Camellia japonica) are seen at the foot, and on the mid-level slopes, forests of beech with conifers, such as fir and hemlock. Above 1,000m, forests change to yellow-green beech, with meadows of broad-leaf bamboo near the top as well as stands of Veitch’s fir (Abies veitchii) and Erman’s birch (Betula ermanii), an eye-catching sight.
Early summer at the foot of the mountain corresponds to early spring at the start of the climbing course. Seasons run backwards as one climbs higher, and the summit may even offer the sight of frost-covered trees. When late summer arrives at the foot of the mountain, in a reversal of seasonal expectations, the summit is welcoming not spring but, rather, early winter.
One of the charms of climbing in these mountains is being able to experience a sort of time travel through two or three seasons in a single trip. 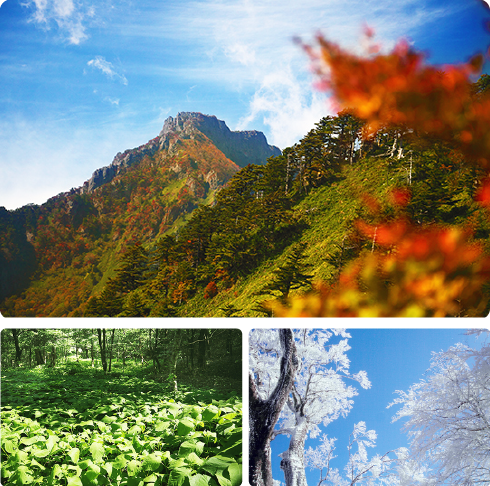 The Ishizuchi Mountain Range contains a treasure trove of precious flora and fauna. In springtime, the mountainside is dyed pink with Rhododendron “Akebono” and Rhododendron “Tosano mitsuba” (Rhododendron dilatatum). At one’s feet are seen yukino-warisō (Primula farinosa subsp. Modesta or the birds-eye primrose), shōjō-bakama (Heloniopsis orientalis or swamppink) and iwa-kagami (Schizocodon soldanelloides or fringed galax). In the summer, there are flower meadows of misogawasō (Nepeta subsessilis or short-stalked catmint), Mountain hydrangea (Hydrangea serrata), kirenge-shōma (Kirengeshoma palmata or yellow wax bells) and others. The trailsides of autumn are decorated with miyama akino kirinsō (Solidago virgaurea subsp. Leiocarpa or goldenrod) and Japanese gentian.
Light, airy birdsongs can be heard from komadori (Japanese robins), coal tits, long-tailed tits and Eurasian wrens. The region also contains a treasure trove of wild birds and animals not seen in the level plains below, such as red-flanked bluetails, crested kingfishers, spotted nutcrackers and more. 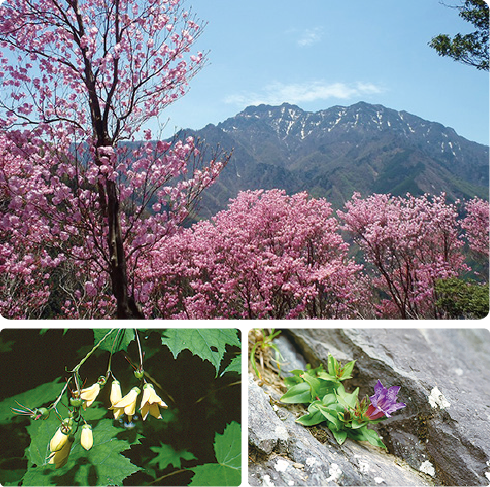 About the History & Religion

Triton’s Trumpet Conch Tones Resound through the Hills
Mount Ishizuchi, One of the 7 Holy Japanese Mountains

Mount Ishizuchi is said to have been “opened,” or established as a site of worship, 1,300 years ago by En no Ozunu, founder of the syncretic Shugendō religion, who did the same at Mount Fuji and other holy mountains throughout Japan. After its “opening,” the mountain itself was worshipped as a shintaizan or a mountain abode of the kami spirits, and is said to have attracted the faith of authority figures from around the era of Emperor Kanmu. With the peak’s precipitous contour and the majestic atmosphere of the climbing route (or Sandō approach to the shrine), the mountain exudes a mystical air.
The Ishizuchi-jinja Shrine is made up of four parts: the Kuchinomiya-honsha main shrine at the foot of the mountain, the Chūgu Jōju-sha Shrine on Mount Ishizuchi’s mid-level slopes (at the 7th stage), the Okumiya Chōjō-sha Shrine at the summit (the “Misen”), and the Tsuchigoya-yōhaiden at Tsuchigoya, the final stop on the Ishizuchi Skyline. 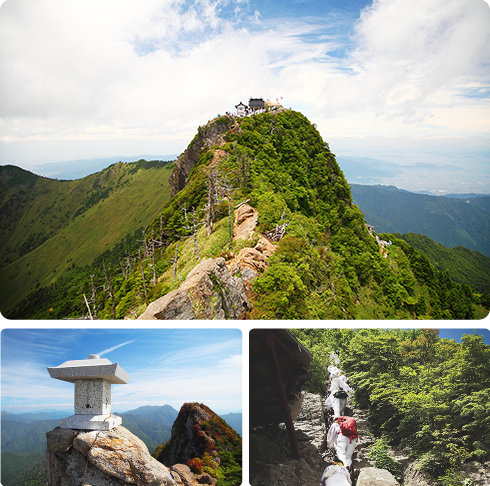 Tens of Thousands of Devotees from All Over Japan Assemble
The Majestic Reitai-sai Festival, “O-yamabiraki Taisai” Festival

Major summer festivities are held at the Ishizuchi-jinja Shrine every year from the 1st to the 10th of July. Known since antiquity as “O-yamabiraki” or “the opening of the mountain,” devotees who visit during the course of the festival number in the tens of thousands. At 7 AM on July 1st, the go-jinzō idols of “Jin” (benevolence), “Chi” (wisdom) and “Yū” (courage) are mounted on the backs of devotees for their departure to the mountaintop shrine. Their arrival at this shrine at 10 o’clock on the same day marks the kickoff of the 10-day festival.
From this time until the idols’ return to Jōju-sha on the 10th, chants of “Nanmaidā” (a variation of the “Namu Amidabutsu” invocation to Amitābha) as well as the sound of conch shells and bells can be heard resounding across the slopes. The sight of devotees going back and forth on the climbing path (Sandō approach) in their white devotional garb is one of the truly unique sights this holy mountain has to offer. 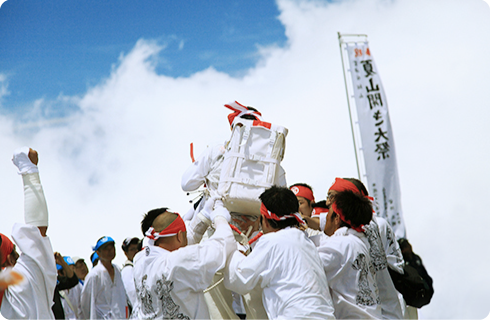 How to Enjoy the Ishizuchi Mountain Range